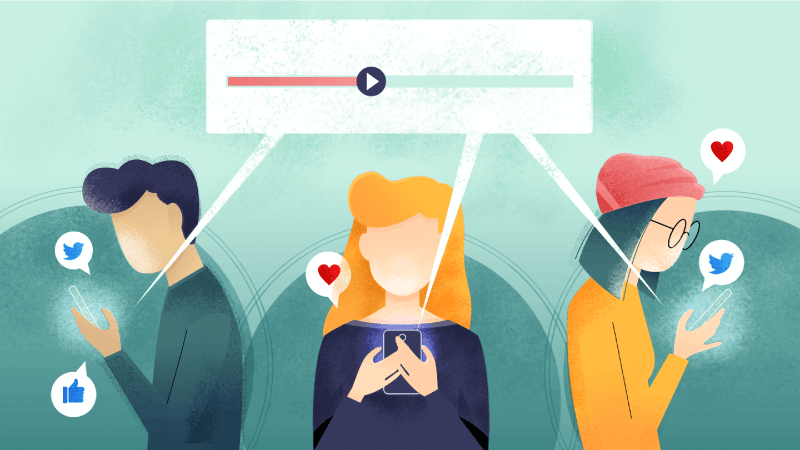 How to Make a Viral Video: 9 Best Practices

Ever wondered what makes a video go “viral”? What gives the video that oomph?

Everyone wants to create a viral video but it isn’t a walk in the park. The difference between creating a good and a great video is the amount of time, thought and effort put into its production.

Effective planning and execution shape the path to what one might consider success.

First of all, why create a video you ask?

Statistics show that 68% of consumers prefer to watch video content to learn about a new product or service. Oof.

Without wasting any more time, let’s get into what you came here for. In this article, we’re going to show you just what to do to make your video go viral.

How to make your video go viral

Now we get to the main part. While making a video, your timing, research, and effort add up to about 95% of the job. The other 5% is luck.

There is no clear-cut formula as such, but these tips will surely help your video achieve virality. It is a mixture of ingredients that will prove useful in the making of a viral video.

In the end, it all comes down to how you use these ingredients to create a masterpiece.

This is by far the most important factor here because the right audience is a huge benefactor.

What kind of crowd is your content aimed towards? When and how often are they online? Which platform is most used by them? Answering these will help in reaching the right audience.

Knowing their interests and the most widely used social platform makes sure the video shows up right where the eyes are pointed at. You have shown the right audience just what they’d be interested in.

These viewers will then do the natural and share the video, considering your video is appealing enough to them.

This will, in turn, pave the way for a broader audience, and again, that is the plan!

Stop for a moment and think about your favorite advertisements. What about it has made you feel this way? That’s right. The story.

Storytelling is one of the most effective ways to deliver a message to the crowd. It helps them relate to your content and keeps them coming back for more. Make it worth their time rather than showing them a boring video of what you’re trying to convey directly.

I mean, who doesn’t like a good story right!

One thing to keep in mind is the attention span of people in today’s world, so be sure to grab attention when it starts.

You will most probably lose half your viewers after minute one, so it’s best to keep your most important and fascinating content at the beginning.

What gives your video the upper hand is the message and value it provides to the viewers.

Was it worth their time? Did it help them in any way? What did they gain from your video? These are questions you should answer before making the video.

Be inspirational. Stories that inspire or invoke an emotion provide more appeal to a viewer. More appeal means more shares which means it’s a viral video before you know it. Voila.

As Zina Magomet from Greater Minds said, “go with an attitude to give, rather than an attitude to get”. At the end of the day, it’s what you’ve given the audience that counts.

If you think simply uploading the video is enough, you’re wrong! Go the extra mile in setting up solid strategies to keep the reach going.

How do you ask? Let’s look into it these actionable tips that will prove helpful.

6. Keep up with current trends

Keeping up with the current trends and knowing what resonates with the audience is vital for your video to jump to virality.

People tend to latch onto topics that they are currently following, and having content that is trending at the moment will increase the chances of viewers sharing the video.

It was started by Taekwondo instructor and fighter Farabi Davletchin on June 25 this year. It went viral, however, after martial artist Max Holloway tried it and then challenged other celebrities like John Mayer and Jason Statham.

This calling out soon became a chain, reaching almost all parts of the world and before we knew it, it was viral.

How could you use this to hook the audience to your video? You could, for example, make a company culture video in which there are instances of your employees or colleagues taking part in such a challenge.

Deliver the right message to the right people at the right time. That is key.

7. Focus on a single message

Focussing on one message in the shortest way possible works wonders, especially for a soon-to-be viral video.

Before you start, define the purpose and focus on getting that message effectively to the audience. Get to the point.

Too many topics would be confusing and will make the video longer, two paths that you must avoid.

Social sharing should be of utmost concern. What does it mean? It means, takes into consideration the platforms and devices your audience is using.

A 2018 statistics report said that mobiles accounted for 75% of online video views. Taking this into account, it is wise to conclude that mobile-optimized videos are very crucial for the success of the video.

9. Be unique and engaging

Do NOT make the video boring and cliché. If you want a viral video, you need to stand out.

People love to be entertained as they gain new information. This being said, make the video engaging. It has to glue their attention.

Do something unexpected. Think outside the box. It could be bizarre, but if it gets the crowd turning, why would you complain!

Remember, any publicity is good publicity, so knock yourself out. Just don’t overdo it.

Now that you know what goes into making a viral video, check out these 5 videos to gain inspiration from.

Here are 5 brilliant examples of viral videos on YouTube, and if you look carefully, you’ll see why.

Watch this video! You’ll understand how they reached 26 million views.

This is probably the best example of a great viral video. It is informative, clever, highlights the business and most of all is absolutely hilarious.

DSC attracts the audience and glues them to their screen from start to finish and appeals to their target audience without an over-imposing brand image AND a reasonable price-tag. Boom! It’s the perfect recipe.

"Sometimes the moments that never happened, matter the most.''

This is the note that Volvo ends their video on for the Volvo XC60.

It is a heartfelt video of a conversation between a mother and her daughter, who tries to imagine her whole life as she leaves for her first day of school.

As she steps out on the road, however, a woman in her new XC60 almost runs her over. Fortunately, the automated-braking system in the model prevents the collision, highlighting Volvo’s key feature - “The Safest Car in the World”.

The video piques interest by tugging on emotions with the thought-provoking story. It is also a testimony to road safety and tries to convey the beauty of an accident-free world.

The 60-second video shows a group of kids who make a change to allow their new neighbor, a boy in a wheelchair, to play basketball alongside them.

This video was a campaign for the 2017 summer Olympics, and boy did it work! It incorporated a beautiful and touching story that hit people right where it should.

Here’s how to make the best out of a bad situation. Honey Maid did it right.

With over 4 million views, this is a product of the negativity that arose from their previous campaign, “This Is Wholesome” that celebrates all families. All.

Long story short, not many people agreed with them. So what did they do?

They took all the negative remarks printed, got two artists, and asked them to do their thing and come up with something creative.

They created something powerful using one emotion that was important for every family - love. It worked!

Always’ main target audiences are girls and women. This video creates an immense emotional impact that all girls connect with.

It focuses on the phrase “like a girl” and its negative connotation in the world today. Featuring boys and girls, adults and children alike, this video goes on to show that it should be positive by encouraging people to rewrite the rules.

Did you notice these viral videos carefully? They all have a strong message in the form of a stronger video, all less than five minutes. It’s a mixture of the ingredients in the right amount, and it’s all done in their own unique ways.

Effective, isn’t it? Yup, and for good reason too.

Now that you have the right idea, go ahead and try it yourself. Got one done? Go ahead and make some more. NEVER stop at one. Keep going.

Still feeling a little lost? Do not worry. Reach out to us and we’ll be more than happy to help.

Saandra is a creative content writer at Studiotale. She is a logophile and a fanatic of word games. When she isn't writing for us, she can be found dancing Bharatnatyam or watching a good Malayalam movie.